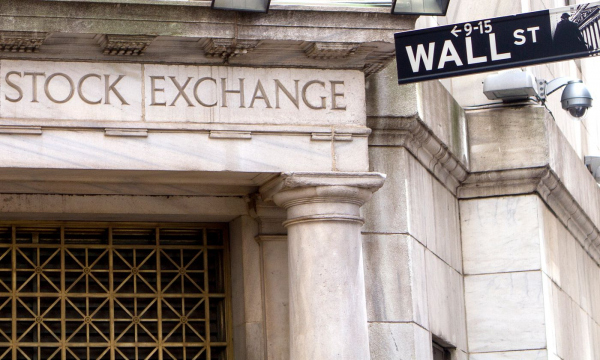 Not Quite the Dog Days of Summer: Busy Week of Earnings, Jobs Report

Another busy earnings week ahead with Uber, Lyft, Square

(Monday Market Open) And so begins the month of August. The dog days of summer. Beaches, mountains, and lazy afternoons.If you follow the financial markets, that thinking might be jumping the gun, as there’s still plenty of action ahead.

Although last week was arguably the height of earnings season, with releases from four of the five FAANGs, plus Microsoft (MSFT) and other top-tier companies across the sectors, this week will still be quite busy with earnings. Plus, Friday marks the day when the monthly employment report is released. Some analysts see this one as a potential watershed report, considering several Fed governors—including Chair Powell—have said the central bank plans to tie any potential policy changes to employment growth. More on that below.

A String of Gains for Stock Indices

Would the market close higher for the sixth consecutive month? That was the thought that was probably going through most investors’ minds on Friday. And from the way stocks performed on Thursday and early Friday, there was likely some concern that it wouldn’t. But in the end, the market made it. The Dow Jones Industrial Average ($DJI) was up 1.25%, the S&P 500 Index (SPX) up 2.3%, and the Nasdaq Composite (COMP:GIDS) up 1.2% for July. That’s in spite of a lower close for the day and week for all three indices. The selloff in Tech stocks, most likely led by Amazon’s (AMZN) lower than expected earnings, may have had something to do with it (more on that below).

Might we see a seventh month of gains? The first trading day in August begins with optimistic sentiment with equity index futures higher ahead of the open. We saw a lot of momentum in the futures market overnight, helped by a 2% rebound in China’s Shanghai Composite Index. Japan’s Nikkei 225, which had also struggled in recent days, rose 1.82% last night.

There’s also a good chance of the bipartisan infrastructure bill being passed by the Senate. If all the final wrangling gets done over the next couple of weeks—they still have to settle on amendments—it could give a lift to some of the traditional industrial companies.

Last week was the busiest earnings stretch of the season—about 59% of the SPX companies have already reported quarterly earnings. Of these companies, 88% have reported earnings per share above consensus estimates, and that’s above the five-year average of 75% according, to FactSet. Now the fun continues with another packed schedule.

Though the earnings storm is a bit lighter than a week ago, data continue to reign. Maybe none more important than this Friday’s payrolls report, especially since it’s a key data point the Fed watches. In June, we saw nonfarm payrolls increase by 850,000. The Briefing.com consensus for July is a gain of 900,000.

Way before the monumental jobs report, we get a fresh reading on the Purchasing Managers’ Index (PMI) from the Institute for Supply Management (ISM) later this morning. It came in at a pretty solid 60.6% in June (above 50 indicates expansion). We’ll see if the strength in the manufacturing sector continues.

When a rally loses steam, especially at the end of a trading week or month, it tends to set off alarm bells. The FAANGs and MSFT make up a big chunk of the SPX and Nasdaq. So when these stocks fall, it’s not surprising to see the indices follow suit. What’s interesting is that over 300 companies in the SPX closed higher on Friday, according to a Barron’s report. One possible implication of the tech selloff is that investors may be thinking that the growth they saw last year may not show up this year. That’s not to say there’ll be no growth—we’ll probably see growth but it may be at a slower pace than what we saw in 2020. It’s not necessarily a bad thing but it does bring up the question about whether there might be a rotation in strength.

Will Cyclicals be the sector that’s likely to see some strength or will it be Health Care? It’s too early to tell especially since we’re not out of the woods with the virus. A lot could depend on how that evolves.

One final note: Did you check the price of General Electric (GE) at the end of the week—with its $12-handle—and now see it’s trading above $100 this morning? There’s nothing wrong with your screen. GE recently announced a 1-for-8 reverse stock split, effective after the close last Friday. For GE shareholders, that means every eight shares owned will combine into one share. Not sure how reverse splits work? Here’s an overview. 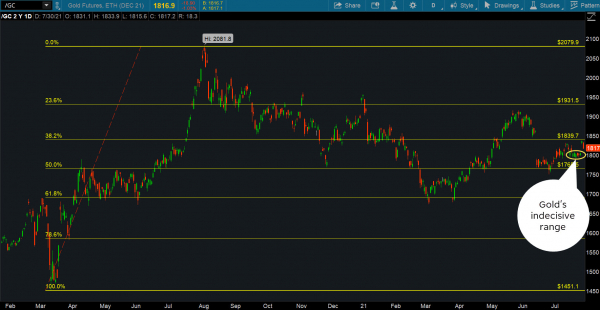 CHART OF THE DAY: HAS GOLD MADE UP ITS MIND? Toward the end of last week, it looked like gold futures (/GC— candlestick) might have finally decided to break out of a trading range it was stuck in by moving up toward the 38.2% Fibonacci retracement level (yellow lines). But on Friday it looked like perhaps that may not have been the right move. Will /GC head back to the $1,800 level? Data source: CME Group. Chart source: The thinkorswim® platform. For illustrative purposes only. Past performance does not guarantee future results.

Gold: Is This Age-Old Asset Playing the Long Game? As a traditional safe haven asset investors flock to when the signs of economic uncertainty—inflation, dollar weakness, bond yield declines, market instability—begin sounding the financial fire alarm bells, the yellow metal has certainly seen its share of ups and downs, particularly in the day-to-day dance of headline risk and volatility.

For those of you who are more technically savvy, the price level where the glittery asset bounced in March and April of this year happens to be a critical support line at the 61.8% Fibonacci retracement level. Whether it reflects real fundamental folly spurring on the metal’s fear trade, or a self-fulfilling prophecy based on an application of Mr. Fibonacci himself, a bunch of buyers piled in at this level, triggering gold’s rebound.

Will gold’s reversal rally continue to gain steam? Well, first it has to clear resistance first at 1,840, and then at $1,931.50 before challenging the $2,082 high (see figure above). Of course, it also depends on various other factors, from the upcoming CPI and other fun(damental) stuff like Federal Reserve statements, labor market data, and pretty much every factor that might affect the inflationary forecast—transitory or not.

More Spending: The June Personal Income and Spending report which was released on Friday indicated better than expected personal spending increase of 1.0% month-over-month. The PCE Price Index was up 0.5% and core-PCE Price Index (ex-food and energy) was up 0.4%. The report also suggested that people are spending more on services rather than physical goods. After spending over a year hunkering down at home people look to be venturing out to restaurants, making travel plans, and spending on personal services.

We are seeing a bit of a tug-of-war playing out—while consumers are spending more than they were during the depths of the pandemic, inflation is running above 2%. Would that cloud the consumer spending forecast? Higher household savings plus increasing wages and household wealth could keep consumer spending strong in spite of price spikes, although Fed Chair Powell stated that these spikes may be temporary. It’s a matter of how long it takes to normalize.

Caution! Twists and Turns Ahead: Even though ride hailing companies have been growing, they may need to adjust their tech if they want to be around. For example, one threat is self-driving cars. How can Uber and Lyft compete and what’s their future? Companies that successfully adopt self-driving tech may be more likely to stick around. What are Uber and Lyft doing to compete in this space? Lyft has announced a partnership with Ford (F) to bring a fleet of autonomous vehicles to the streets by the end of 2021, when Lyft passengers are envisioned to be able to select self-driving cars through the app in designated areas.

Another area of expansion is international—as smartphones and access to the internet become cheaper, they may be able to connect drivers to cars in more countries and cities. And then of course there’s competition from delivery companies. Uber acquired Cornershop, a grocery delivery company, and is clearly ramping up UberEats by rolling it into its Uber ride-share app, enabling passengers to book and pick up meals while en route to somewhere in an Uber ride. UberEats’ bookings have more than doubled from a year earlier. The pandemic offered up a reminder to companies great and small: diversified revenue streams can sometimes help them weather those occasional storms. The ride-hailers seem to be casting wider nets.