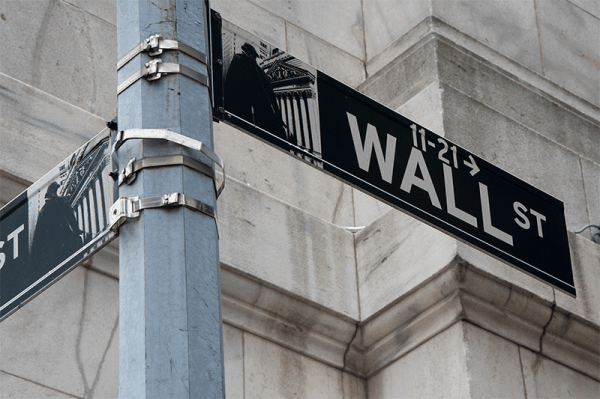 Volatility rises sharply with other fear indicators, but resistance not pierced

(Friday Market Close) Markets hate uncertainty, and that’s exactly what they’re dealing with as coronavirus spreads. Fears got exacerbated Friday as investors looked ahead to Monday’s re-opening of Shanghai stocks after more than a week off.

A lot of it comes down to what might happen this weekend and Monday. It’s hard to get excited about holding long positions on Friday if you’re worried China’s stock market might lay an egg late on Sunday U.S. time when things get rolling across the Pacific. It looks like many people didn’t want to potentially catch a falling knife. The virus scare is having a real effect on airline, cruise line and hotel stocks, especially.

Selling rolled along pretty steadily throughout the day, without too much buying interest showing up at the lows. There was never a period of the session where it looked like things might be coming back, but on the other hand it didn’t look like a panic, just a steady flow of selling and no buyers.

By the end of the session, every major index had given up 1.25% or more, with the Dow Jones Industrial Average ($DJI) falling into the red for the month. Every sector except Consumer Discretionary—which got a lift from Amazon (AMZN) earnings—finished in the red. Utilities was the second-best performer. Energy finished at the very bottom with more than 3% losses.

Sunday night looms large. Remember to keep a close eye on U.S. futures trading in the evening right around the time Shanghai opens. People appear to expect sharp losses in China, but Friday’s U.S. sell-off might have been one of those “sell the rumor” scenarios. In other words, people seem prepared for a huge sell-off, so something less than a worst-case-scenario in Shanghai could get viewed as constructive. As Yogi Berra once said about baseball: “You never know.”

Berra also said you can see a lot just by watching. Try and remember that this weekend and watch for virus developments. News about more infections and deaths obviously would be unfortunate from a human perspective, but also might get people even more nervous around Wall Street. The market actually rallied late Thursday after the World Health Organization (WHO) declared the virus an emergency, maybe out of hopes the WHO might take more aggressive measures. Any action on their part as well as any border closures or airline flight cancellations could play into the mood by Monday.

Risk-off might remain the tone until things start improving on the virus front. The 10-year Treasury yield traded at around 1.51% late Friday, its lowest level since last summer. There’s been a rush all week, even when stocks were rising, to get into so-called “safe havens,” though no investment is completely safe. Gold and the yen—two other “safety” zones—also continued to move higher Friday.

Meanwhile, crude is having a rough ride, as U.S. futures dropped below a key technical support level to their lowest point since early October—just above $51 a barrel. Analysts think the virus could have a decent-sized impact on how much crude China imports.

The interesting thing is that despite all the fear, volatility didn’t go too crazy this week. The Cboe Volatility Index (VIX) climbed to around 19.50 at one point late in the day Friday before ending under 19, but the fact that it stayed below the psychological 20 level could suggest that investors are worried, but not incredibly worried. We’ll have to monitor VIX closely next week and see if it breaks above the 20 barrier.

Here’s another possible sign that fear isn’t necessarily all-consuming: Neither bonds nor gold broke above what some analysts see as key resistance levels. Gold finished the week below $1,600 an ounce and 10-year yields stayed just barely above 1.5%. That said, some people are getting nervous about the yield curve, as three-month yields surpassed 10-year yields this week. However, two-year yields seem to be stabilizing (for now) at about an 18 basis-point discount to the 10-year yield. Those two inverted in mid-2019.

Some analysts suggest that the market shake-up we’re suffering through wasn’t all that surprising considering how quickly things had risen. The virus, some say, could have been a good excuse for some people to take profit. This school of thought argues that the S&P 500 Index (SPX) could fall to around 3150, about a 5% to 6% decline from the all-time high, before a “buy the dip” mentality re-emerges. That’s just speculation for now

Looking longer-term, investors and analysts appear worried about how the virus might cloud the earnings picture even more. Caterpillar’s (CAT) CEO warned Friday about “global economic uncertainty,” and that company is often seen as a good barometer for world industrial demand because of its huge global footprint.

Even before the virus, Wall Street’s earnings outlooks weren’t too sunny, as Q4 looks like it could be the fourth in a row of declining numbers. Now 2020 estimates are coming down. There was a point when some analysts thought earnings might grow as much as 10% this year, but now mid-single digit estimates dominate.

It didn’t help that Friday was the last day of the month and people apparently wanted profits. Many investors had enjoyed a great January, at least before the virus took a bite. So there was pressure to pick up the proceeds and head into the weekend with a relatively clean slate and less exposure to whatever happens when Shanghai gets started. The phrase of the day might have been “lighten the load.” A lot of major companies across many sectors saw 4% losses Friday.

Why didn’t buyers show up Friday at the lows? Well, consider the fact that the S&P 500 price-to-earnings ratio (P/E) approached 20 before this sell-off began, a historically high level. Even with the selling this week, P/E remains well above historic averages. So people might still see a market that’s priced for perfection and not a great bargain opportunity.

Firms That Move People and Stuff

Travel stocks have really been taking a dive. The Dow Jones Transportation Average ($DJT) posted fresh 2.4% losses Friday and is down nearly 5% over the last five sessions as airline stocks lose altitude. Worries about Boeing’s (BA) 737 MAX issues already had the $DJT hurting, but the virus just pours salt in the wound.

For long-time trend watchers, $DJT holds a special place, as its movement relative to the venerable Dow Jones Industrial Average ($DJI) is one of the primary indicators highlighted by Charles Dow in his original theory. When the transports cross over the industrials to the downside, that’s taken as a sign of weakness (see chart below).

While it’s certainly debatable in this day and age—and considering in the modern tech era transports don’t hold the same sway as they used to back in Dow’s day—the technical signal does have a fundamental reasoning behind it. Weakness today among the companies that move people and things could signal weakness in consumer demand, which could spell trouble down the road. In other words, $DJT weakness could be seen as a leading economic indicator. 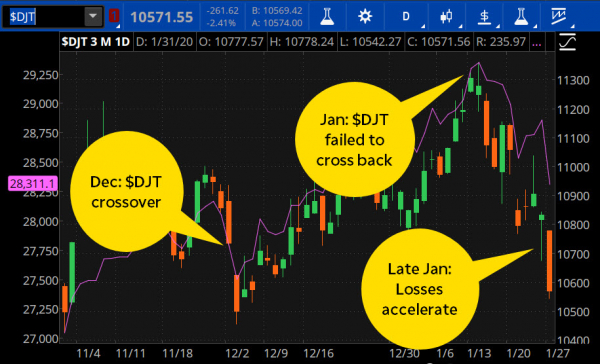 CHART OF THE AFTERNOON: LEADING INDICATOR? The Dow Jones Transportation Average ($DJT—candlestick) crossed below the Dow Jones Industrial Average ($DJI—purple line) in early December, and though it gained some ground after its pullback in late December, it failed to eclipse the industrials to the upside. The coronavirus outbreak, which has been hitting the airline and travel industries particularly hard, helped lead $DJT even lower relative to $DJI. Data source: S&P Dow Jones Indices. Chart source: The thinkorswim® platform from TD Ameritrade. For illustrative purposes only. Past performance does not guarantee future results.