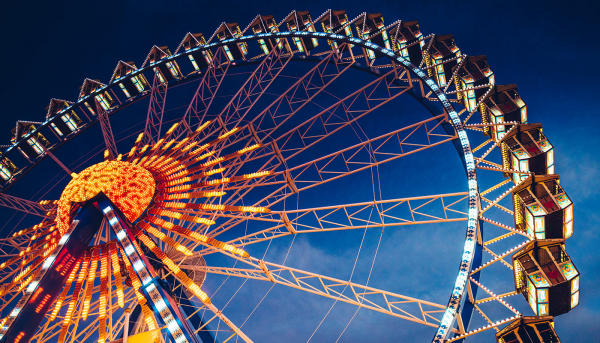 Disney Earnings Ahead: The Magic Kingdom Cruised on Streaming Services During the Pandemic

Disney+ logged 86.8 million subscribers as of Dec. 2; analysts widely expect to hear that base now stands at 100 million

Disney+ expects to release more than 100 movies in coming years

What if we told you Disney (DIS) would shutter parks and dock cruise ships during a big chunk of the busy season, do a phased reopening with limited capacity that could last well beyond a year, start a global battle with Netflix (NFLX) and the stock would essentially double over the period?

You might think we’re talking fairy tales. But there’s no fable here.

Since the onset of the pandemic nearly a year ago when DIS stock hit a 52-week low of $79.07 in March, shares have more than doubled, closing out last week nearly 130% higher. On a year-over-year basis, the stock is up nearly 30% compared with about 17% for the S&P 500 index (SPX). Those are facts.

What’s more, adjusted earnings for DIS in the fiscal year that ended Oct. 3 collapsed by 64%, the company reported. And that came after a 94% earnings pullback in its fiscal Q3. And when the world’s largest entertainment conglomerate unwraps its Q1 earnings Thursday, Wall Street is widely expecting another deep double-digit dive compared with year-ago results.

What’s going on in the Magic Kingdom? Not much. Remember, the theme parks and cruise ships went dark during last spring’s lockdowns, and have slowly begun reopening the gates at limited capacity since then. When DIS shutters a park, it loses not only the gate revenue but also those hotel, dining, and shopping dollars as well.

Don’t forget, too, like every other major Hollywood studio, DIS, which produces movies out of Pixar, Marvel and Walt Disney Studios, had to halt film releases in theaters and carefully orchestrate movie making in the age of COVID. It laid off 32,000 workers last year, saw ad revenues from ESPN dribble away and has struggled with its retail operations.

DIS’ share price story (see chart below) seems to rest with Wall Street’s anticipation that once the world harnesses the coronavirus and its variants, and vaccinations become more widespread, everything will be all-systems-go at the House of Mouse as pent-up demand is unleashed.

Oh, and there’s Disney+ to consider, analysts said. Since a marathon investor day in December, analysts have largely been upping expectations based on DIS executives’ guidance and the onslaught of movies they expect to be released soon. They also widely believe DIS’s future is as much in direct-to-consumer (DTC) experiences as it is in theme parks and movies. 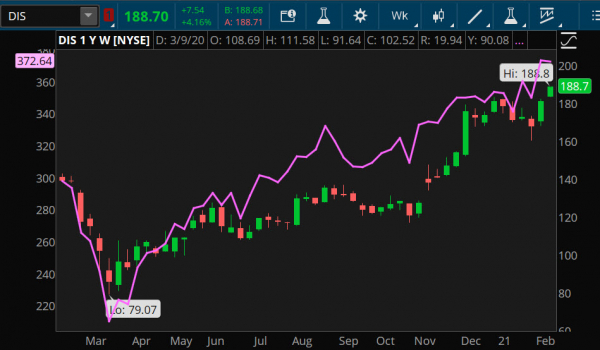 FIGURE 1: BEYOND THE PARK CLOSURES. Like much of the market—including the Communication Services Sector ($IXC – purple line)—sentiment turned positive on Walt Disney (DIS – candlestick) after the initial COVID-19 scare in March 2020. Data sources: NYSE, S&P Dow Jones Indices. Chart source: The thinkorswim® platform from TD Ameritrade. For illustrative purposes only. Past performance does not guarantee future results.

The Battle with Netflix

Disney+ might underscore how quickly a DTC streaming business can grow—if circumstances (like sequestered families and limited entertainment alternatives) present themselves.

With only one birthday under its belt, Disney+ was reaching 86.8 million subscribers as of Dec. 2, the company reported at its investor day. That was up nearly 20% from the 73 million subscriber base as of the end of Q4. Analysts said they’ll be listening for fresh numbers, and comparing the trajectory to internal forecasts that see the base tripling by 2024—to a jaw-dropping level of between 230 million and 260 million subscribers. DIS executives have also said they plan to up the price a buck to $7.99 per month.

When DIS reports earnings after the close Thursday, Feb 11, consensus from third-party analysts expect the company to report a loss of $0.42 per share—versus a profit of $1.52 per share in the year-ago quarter—on revenue of $15.91 billion. That revenue figure would mark a fall of 23.7% from a year ago.

The options market has priced in an expected share price move of 5.1% in either direction around the earnings release, according to the Market Maker Move™ indicator on the thinkorswim® platform.

Looking at the Feb 12 options expiration, put activity has been highest at the 175 strike, but calls have seen more activity overall, with concentrations at the 190 and 200 strikes.

Though NFLX is the king of streaming services that DIS hopes to dethrone, there are plenty vying for a place in the palace: DIS’ Hulu and ESPN+, Apple’s (AAPL) Apple+, Amazon (AMZN) Prime Video, Peacock, part of the Comcast (CMCSA) family and AT&T’s (T) HBO Max.

With Hulu and ESPN+, the DTC segment—which includes its international subscriber count—accounted for some 26% of total revenue last year, marking an 81% jump on a year-over-year basis. Analysts said they expect double-digit results again as its deals with AAPL, Alphabet (GOOGL), Roku (ROKU) and others continue to grow. Add in those subscriber numbers and DIS has claims on 137 million subscriptions.

“The tremendous success we’ve achieved across our unique portfolio of streaming services, with more than 137 million subscriptions worldwide, has bolstered our confidence in our acceleration toward a DTC-first business model,” DIS CEO Bob Chapek said at the investor day.

“With our amazing creative teams and our ever-growing collection of the high-quality branded entertainment that consumers want, we believe we are incredibly well positioned to achieve our long-term goals,” he added.

Investor day seemed like a bombshell for analysts based on some of their reports afterward. The company unveiled a bounty of announcements, including its plan to release more than 100 movies and shows tied to its successful franchises such as Star Wars, Indiana Jones, Marvel, National Geographic, and FX.

Among the new shows on the docket are Loki, additional seasons of The Mandalorian, and Raya and The Last Dragon, and newbies such as “Jungle Cruise,” an adventure film based on DIS’ theme park of the same name.

DIS is also bringing out a general entertainment content leg it’s calling Star, which will be placed on Disney+ with a Star banner in Europe, Canada, Australia, New Zealand, and Singapore, the company said.

Those announcements helped lead to a number of upbeat analyst calls. “Our call has been dead wrong,” Lightshed Partners analyst Richard Greenfield wrote about a month after the investor day. He noted his team “focused on how the market under-appreciated the impact of COVID-19” on fiscal 2020–2021 earnings. “We were simply blown away (on investor day) by the depth of content being created for Disney+ (and the financial oomph behind it).

“Increasing content spend on Disney+ to over $8 billion by 2024 compared to a target of $4 billion set just a year ago is a dramatic acceleration,” he said. No kidding.

Buoyed by the push into streaming, analysts said they also want to hear updates on when DIS thinks it may be back to full steam in the theme park and cruise ship businesses based on current global realities, and how the company might be tweaking the businesses to meet a higher bar of personal comfort. Theme parks are built to pack people in with crowded shows, ride queues, and resort pools. These are all logistical challenges in a socially-distant world.

DIS’ retail business might also be ripe for a few tweaks, as revenues from movie paraphernalia and other cross-platform marketing have fallen short and may struggle to return to the way they once were.

So while the place for fun and frolic deals with the impact of COVID-19 closings and consumer hesitancy toward anything geared for crowds, DIS is leaning into streaming like never before.

“We are prioritizing our DTC platforms—both in terms of how we distribute our content and also through our increased investment in original programming for Disney+, Hulu, ESPN+,” Kareem Daniel, DIS’ media and entertainment chairman, told investors and analysts in December.

“By significantly ramping up production for these services, we will not only accelerate the growth of our DTC businesses but also solidify our deep and very personal relationship with consumers globally,” he added. Stay tuned.