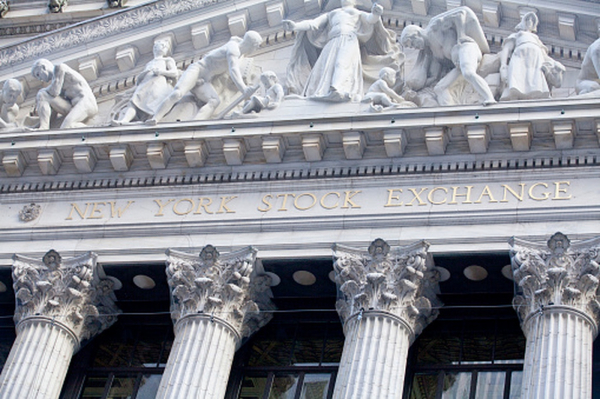 Tesla models will be exempt from China’s auto purchase tax

(Friday Market Open) In the last trading session before a U.S.-holiday weekend, investors appear to be optimistic a day after some of the trade tensions between China and the United States seemed to thaw a little.

With the trade war between the world’s two largest economies arguably the single biggest thing on market participants’ minds, it seemed to come as a relief when, according to CNBC, a spokesman for China’s Ministry of Commerce said China firmly rejects escalation of the trade war and is willing to negotiate with a “calm attitude.” And President Trump said talks had taken place Thursday and more are scheduled. This morning, investors were greeted with news, according to Reuters, that China’s Foreign Ministry said negotiating teams from the two countries are maintaining effective communication.

In what could also be considered a conciliatory move by China, the Asian nation said that 16 of Tesla’s models will be exempt from China’s auto purchase tax. The automaker, whose shares were up 3% in premarket trading Friday, also raised prices for some of the vehicles it sells in China amid a fall in the value of the yuan.

It’s a good sign that China and the United States are talking, and the market seems to continue to trade off the momentum from the conciliatory Chinese comments yesterday. If we end up closing around where equities index futures are indicating this morning, it would mark a good week for the S&P 500 Index (SPX) and Dow Jones Industrial Average ($DJI).

But the momentum might be tough to sustain throughout the day as traders and investors may be headed for the exits early ahead of the long weekend.

Another thing to keep in mind is that volume can be thin heading into a holiday weekend. Some market participants may even have headed out yesterday afternoon to make it a four-day holiday. That thin volume can lead to outsize moves, especially if we see big geopolitical news break.

Speaking of outsize moves, Ulta Beauty (ULTA) shares were down more than 25% after the cosmetics retailer reported earnings, revenue and same-store sales that missed expectations. The company also lowered its revenue and growth guidance.

But in a bright spot for the consumer, Big Lots (BIG) shares were rallying after the discount retailer reported earnings that handily beat analyst expectations. The news comes after Dollar General (DG) beat expectations and raised guidance.

On Thursday, the conciliatory tone from China seemed to especially help the trade-sensitive Information Technology and Industrials shares, boosting both sectors by more than 1.7%. Technology companies often derive a significant portion of their revenue from China and are seen as a proxy trade for the ups and downs of the trade war in a similar way to Industrials companies including Caterpillar (CAT) and Boeing (BA).

With the latest trade development, some market participants could be becoming more optimistic about corporate earnings. If trade tensions end up softening meaningfully and that helps reduce corporate uncertainty and boost bottom lines, it would be important given how earnings drive the market over the long run.

But Resolution Still Appears Far Off

It is, however, premature to speak of the trade war in the past tense, as we could still have a ways to go before we see some sort of resolution.

In the meantime, as tariffs remain a very real part of global commerce, companies may continue to face uncertainty about their earnings and forward-looking capital expenditure or other business plans.

Take Best Buy (BBY) for example. The United States has said it’s planning tariffs on many of the goods the consumer electronics retailer sells, and BBY on Thursday cut its annual sales forecast in the face of uncertainty. If the additional tariffs go into effect, the company would either have to pass the costs along to consumers, potentially denting sales, or eat the higher costs itself, potentially harming margins, or perhaps some combination of both. BBY’s CEO Corie Barry said: “It is hard to predict how at the macro level consumers will react to higher prices resulting from tariffs.”

BBY’s shares fell nearly 8% after it announced guidance for revenue that was below the third-party consensus range and missed Wall Street’s revenue expectations. However, its earnings did beat expectations and its revenue miss was by a pretty narrow margin.

It’s another example of how worried Wall Street appears to be about the prospects of the trade war continuing to be prolonged. They seem to fear that scenario would clip global economic growth to a degree that could help tip the United States into a recession.

Looking To Next Week

Even though it’s a holiday-shortened week, there are still some economic data points next week that investors may want to pay close attention to.

When the market reopens next Tuesday after Labor Day, another key measure of manufacturing demand—the ISM Manufacturing Index—will come out that morning. Construction spending also is due that day.

Investors are also scheduled to get another look into what’s on the Fed’s mind as the central bank releases its Beige Book on Wednesday. We’ll get another look at manufacturing conditions with July’s factory orders report on Thursday.

And to cap off a week that began by honoring the nation’s workers, it’s perhaps fitting that we’re scheduled to get the latest government report on the labor market in the form of August’s non-farm payrolls report. 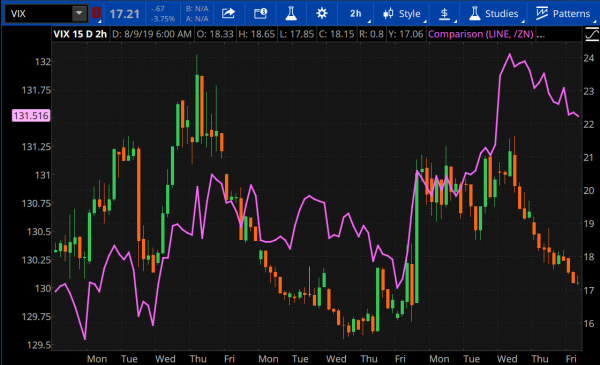 FIGURE 1: REVERSAL OF FLIGHT. After a volatile week on Wall Street marked by a flight to the apparent safety of U.S. Treasuries, fear seems to have ebbed a bit. For the past two days, the market’s main fear gauge, the Cboe Volatility Index (VIX – candlestick), eased back to around 17 as of Friday morning. Meanwhile, 10-year Treasury Note futures (/ZN – purple line) also sold off a bit. Data sources: Cboe Global Markets, CME Group. Chart source: the thinkorswim® platform from TD Ameritrade. For illustrative purposes only. Past performance does not guarantee future results.

Approach of Brexit Could Unsettle: The trade war with China isn’t the only overseas news investors are mulling over. There’s still a lot of anxiety about U.K. Prime Minister Boris Johnson saying he’d schedule the formal reopening of parliament for October 14. That would restrict parliamentary time before the Brexit deadline and increase the chances of the U.K. leaving the EU with no deal. When investors come back Tuesday from the long weekend, the Brexit deadline will be right in front of them. This could be something that hits the market right in the face with a fresh round of volatility. At this point, a no-deal Brexit appears much closer than any kind of settlement of the China tariff situation.

A no-deal Brexit is uncharted territory for the market, so it could certainly drive more uncertainty. As we’ve said before, markets tend to hate uncertainty, and that could end up lighting a new fire under all this “flight to safety” trading we’ve seen in the bond market. No investment is “safe,” of course, and bonds and dividend stocks are both up sharply over the last year, causing some analysts to question how long these rallies can last.

Consumer Strength Continues: Even though the bond market has flashed a recession indicator called an “inverted yield curve,” U.S. gross domestic product at the moment seems to be OK. The government’s second estimate for Q2 gross domestic product was pretty much in line with third-party consensus expectations at 2%, but down from the first estimate of 2.1%. That reinforces the narrative that we’ve been seeing where, at least in the United States, GDP, jobs, and consumer data have been fairly robust, offering counterpoints to the recession fears from the bond market. An interesting point in this most recent GDP report is that consumer spending growth was revised to 4.7% from 4.3%. Briefing.com noted that this was the strongest showing since the Q4 2014 and said “it offers a nice reminder that the U.S. consumer, supported by a tight labor market, has remained in good shape.”

Stormy Outlook: One thing you may want to monitor over the long weekend, both for its potential effects on the market and for its possible human costs, is Hurricane Dorian. As of early Friday, the storm was strengthening and looking like it could make landfall in Florida as soon as Monday. With Florida’s governor having declared a state of emergency, our thoughts go out first to people in the storm’s path. But Dorian could also have a financial impact on insurers, agricultural production, and the mortgage bond market.