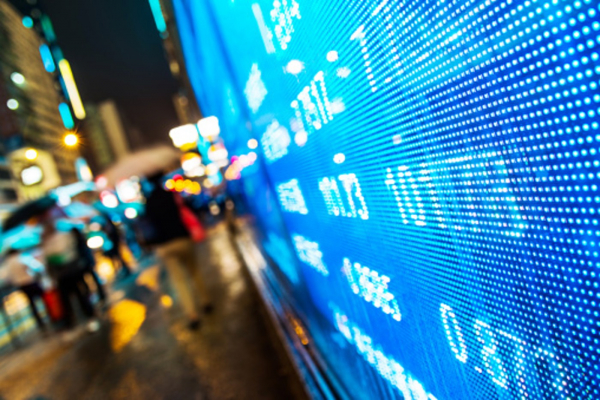 Bond yields remain under pressure and VIX back above 20

(Tuesday Market Open) A new set of tariffs and the market gives back last week’s advance.

Some of the Chinese goods subject to fresh 15% U.S. tariffs that took effect over the weekend include apparel, footwear, consumer electronics and toys. China slapped some tariffs of its own on American goods and also filed a complaint with the World Trade Organization (WTO).

Beyond tariffs, the new month begins with turbulence in a lot of places. The hurricane is slowing down business along the East Coast, there’s tension in Hong Kong, the British pound fell below $1.20 after some terrible manufacturing data there, Chinese tech firm Huawei is accusing Washington of launching cyber-attacks against its internal network, and China went to the WTO.

A mixture of a lot of things is disrupting business around the world, and that could account for the Wall Street weakness.

The month has a back-loaded first week. Excitement centers around Friday, when investors get a look at the August jobs report and hear from Fed Chairman Jerome Powell.

While it’s unlikely Powell will say too much about interest rates considering the next Federal Open Market Committee (FOMC) meeting is just a couple weeks away, you never can go on auto-pilot when he’s talking. The market tends to react pretty sharply one way or another to Powell’s words.

Investor reaction also seems likely after Friday’s jobs report, especially if the headline number looks weaker than July’s 164,000 gain. People are on edge about the economy, something pretty evident from the way the bond market has behaved recently. Any signs of soft numbers could potentially send more investors flocking into so-called “defensive” investments like bonds and dividend stocks.

The 10-year yield remains mired down near 1.48%, and the 30-year Treasury bond’s yield remains below 2%. There’s still an inversion between 2-year and 10-year yields. A move toward fixed income could reflect investor caution amid trade worries.

That caution was in the mix last Friday when the U.S. Dollar Index ($DXY) posted a new intraday high for the year at just above 99. That’s a level we haven’t seen since April 2017, and might reflect investors snapping up U.S. assets amid concerns about slowing European and Asian economies and negative bond yields overseas. Weakness in the euro—now at 16-month lows vs. the dollar—probably plays a big role in the dollar’s rally, but any time the greenback climbs it represents potential headwinds for U.S. companies selling products overseas.

Strength in the dollar appeared to weigh on gold and crude toward the end of last week, though it’s also possible that gold just saw some profit-taking after recently posting six-year highs. We’re still seeing this odd lineup of circumstances where the dollar is rising despite U.S. Treasury yields sinking to near all-time lows. The situation likely reflects demand for U.S. assets amid weakness abroad. However, it was a bit perplexing not to see gold get a bid Friday amid all the caution.

Stocks ended Friday with weekly gains of 2.8% for the S&P 500 Index (SPX), breaking a string of four losing weeks in a row. That doesn’t necessarily wipe out the bad taste August left in investors’ mouths with its nearly 2% decline in stock prices. The good news is that some cyclical sectors, including Materials, Industrials, and Financials, all looked relatively healthy on Friday. In another piece of good news, the Chicago PMI for August rose back above 50, meaning it indicates improving conditions. The July reading predicted worsening conditions.

Though gold did descend a bit on Friday, volatility held in pretty firm, with the Cboe Volatility Index (VIX) edging above 20 early Tuesday. Anything above 20 tends to signal heightened investor fear.

One area of the market that some analysts thought might get a lift before the weekend was the big-box home renovation companies like Home Depot (HD) and Lowe’s (LOW), where people lined up for supplies ahead of the hurricane. The rally didn’t happen, but this sector could be worth watching today for any storm reverberations (see more below on potential market impacts from hurricanes).

Another market region that didn’t see a bounce late last week was our old friend the FAANGs, which fell almost across the board Friday with the exception of Facebook (FB). Semiconductors did a little better last week, climbing on hopes of progress in the U.S./China trade talks which start this month.

Maybe the jobs report can give investors a better sense of how consumer demand might shape up as the holidays start to approach. We’ll spend time later this week discussing analysts’ predictions for the headline payrolls number and other data pieces to consider watching. Before that comes today’s July construction spending number and the August ISM Manufacturing data, both of which could be monitored closely for signs of business spending and investment.

The Fed’s Beige Book—a look at the health of regional economies—comes tomorrow, followed by jobless claims on Thursday. Remember that some analysts suggest closely monitoring weekly jobless claims as a possible first sign of any developing economic softness.

Hopes did rekindle late last week for some sort of resolution to the U.S./Chinese standoff. The news around China throwing out an olive branch raised optimism that it might lead to some de-escalation and that cooler heads might ultimately prevail. We’ve been down this road before, so it’s probably not a good idea to get too hopeful too soon.

The SPX hasn’t budged out of its 2750-3000 range over the last month, and on Friday it once again acted listless when it approached what some analysts see as a technical resistance area around 2935-2940. That’s been the top for more than a month and has held through a number of tests. 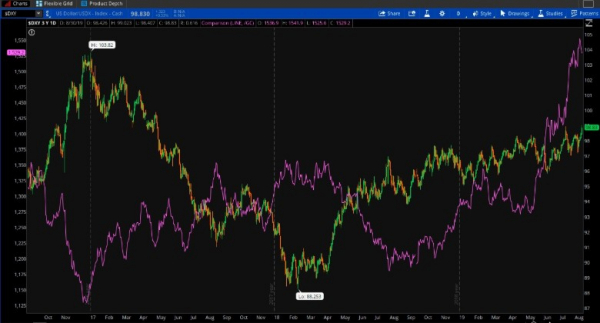 FIGURE 1: CHART-TOPPERS: This three-year chart shows that the last time the dollar index (candlestick) touched current levels, back in early 2017, gold (purple line) was down on its luck. Now, U.S. assets like the dollar and so-called “flight-to-safety” investments like gold both are seeing heavy demand amid global trade uncertainty, and both are at multi-year highs. Data Source: ICE, CME Group. Chart source: the thinkorswim® platform from TD Ameritrade. For illustrative purposes only. Past performance does not guarantee future results.

Stormy Weather: Hurricane season can have a major impact on the markets and economy. Over the last few years, the September and October jobs reports have gotten out of whack following big hurricanes that pushed down hiring in the hotel and restaurant sector in large parts of the country affected by the bad weather. Those jobs came back in big rebounds, usually by the November and December jobs reports, but you had to take those gains in the context of businesses hiring people that they’d been unable to hire during the storm season. Construction jobs also can tick up after hurricane season as workers get hired to fix the damage. All this can make for some messy comparisons between monthly jobs reports.

In the stock market, Consumer Discretionary and housing sectors often take a hit from the storms due in part to lower demand from tourists in the affected parts of the country and less home building as the storms blow in. A bad enough hurricane season can even weigh on Q3 gross domestic product (GDP) for the entire county.

Who Wants a Rate Cut? The new month starts with little in the way of earnings, but a jobs report and then the Sept. 18 rate decision by the Fed both stare investors squarely in the face. Many company executives have been fielding media questions about whether they need a rate cut, and generally the answer has been no. Arguably, the stock market doesn’t need a rate cut with rates already so low, and it’s unclear how much difference an additional 25-basis point cut the market expects later this month can make. It’s relatively easy to borrow money at today’s rates, and CEOs instead are complaining to reporters about uncertainty around the tariff situation.

The bond market, on the other hand, arguably needs a rate cut to help justify the rally it’s been having over the last month. The 10-year yield remains near record lows below 1.5%, down from above 2% as recently as July. Basically, the bond market is telling investors, “We’re going to get a rate cut whether the Fed and Jerome Powell want it or not so we can keep U.S. rates in line with those in Europe.” You could argue that the bond market is kind of forcing the next rate cut.

The Elusive Crude Market Rally: Poet and musician Bob Dylan once said you “can’t buy a thrill.” Well, this year the crude oil market can’t buy a rally. After gaining some ground last week after a large draw from U.S. stockpiles, crude oil remained below $55 a barrel for U.S. futures early Tuesday, a level it’s pivoted around for weeks. The U.S. crude market did spend a while above $60 back in May, but hasn’t been there since. You can’t necessarily blame it all on the evils of the trade war, either, though that hasn’t helped. A number of other factors also play in, including weaker global economic growth, signs of possible thawing in the U.S./Iran relationship, and new pipelines opening to connect the thriving U.S. Permian Basin oil fields with world markets.

The U.S. Energy Information Administration (EIA) recently lowered its global oil demand growth outlook for 2019 to 1 million barrels per day, and the International Energy Agency (IEA) also recently revised its demand growth estimates for 2019 down by 100,000 barrels per day to 1.1 million. That’s only about 1% growth year-over-year. Demand growth between January and May was just 520,000 barrels per day, the lowest increase for the period since 2008, internet energy news site OilPrice.com reported. Hard to rally with demand barely rising. What does all this have to do with the stock market? Remember that energy demand often can say a lot about business and consumer demand, so these low crude prices might be one sign of slowing economic growth. A move below $50 a barrel would probably raise some eyebrows about the economy, while a move to $60 or higher might give the Energy sector a boost.