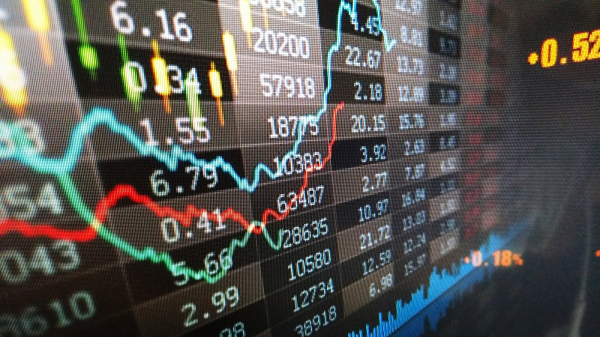 (Thursday Market Open) Investors appear to be in an optimistic mood this morning on news that the United States and China have agreed to high-level trade talks next month. The world’s two largest economies will also hold preparatory consultations during the middle of this month.

The news seems to be helping Wall Street gain more momentum a day after solid gains yesterday. Because the optimism is trade related, trade sensitive stocks like semiconductor companies and trade bellwethers such as Caterpillar (CAT) and Boeing (BA) could end up doing well today.

A word of caution: It seems like we’ve seen this movie before. Stocks get a lift on positive trade news only to give the gains back later when other headlines throw cold water on the excitement. It seems likely that there may still be a long road to travel before the two sides reach an agreement, and during that time it’s possible that the market, as measured by the S&P 500 Index (SPX) could fluctuate in a range between 2750 and 3000 as trade tensions keep a cap on gains and pockets of strength in the U.S. economy help to keep a floor under stocks.

With the encouragement on the trade front, investors were selling U.S. government debt and pushing up yields. Of note: The yield on the 2-year Treasury is below that of the 10-year Treasury, and the 30-year yield is above 2%, signs that there is less economic worry among market participants at the moment. And with yields on the rise, the Financials sector could help lead the market higher today.

The positive trade news comes after the Caixin/Markit Services Purchasing Managers’ Index hit its highest number since May, showing growth in China’s services sector that provided a counterpoint to the nation’s struggling manufacturing sector and helped allay some worries about the trade war’s impact on the world’s second largest economy.

And after Hong Kong’s leader withdrew a controversial extradition bill, helping to ease some of the tensions that have sparked protests there, market participants seemed to be breathing a little easier. Hong Kong is a major global financial center, and protests there have raised worries about revenue for airlines flying in and out of the major Asian transport hub. According to CNBC, some investors have feared the protests could be a headwind for U.S.-China trade negotiations.

With upbeat news that could potentially help things on the trade front between the world’s two largest economies, the trade-sensitive Information Technology sector was the best performing of the day. Some tech companies derive a substantial portion of their revenue from China and maintain supply chains in the Asian nation, so their stock prices often rise and fall with the trade-related news flow.

Semiconductor stocks also got a boost yesterday from a bullish analyst report from JPMorgan. Andshares of Western Digital (WDC) and Micron (MU) also helped the sector, rising after Mizuho boosted its price target for both companies.

In other news from overseas that helped keep the market in the green on Wednesday, lawmakers in Britain approved legislation aimed at preventing the country from leaving the European Union without a withdrawal agreement.

Britain’s exit from the European Union has perhaps taken a back seat to the U.S.-China trade drama in investors’ minds recently. But with an October deadline looming, Brexit-related stock market volatility could heat up again as market participants worry that the unprecedented event could lead to financial market turmoil and become another factor weighing on global growth in addition to the trade war.

In news closer to home for U.S. investors and traders, the latest Beige Book, which summarizes anecdotal information on current economic conditions in each Federal reserve district, was generally positive. Overall, reports from districts “suggested that the economy expanded at a modest pace through the end of August” and “the majority of businesses remained optimistic about the near-term outlook” despite concerns about tariffs and trade policy.

However, overall manufacturing activity was down slightly from the previous Beige Book, and farm conditions remained weak because of weather, low commodity prices, and trade related uncertainty. Still, those trends aren’t exactly new, and many in the market may have already factored weaker manufacturing and agriculture into their economic and market outlooks, meaning that on balance, the Beige Book painted a decent picture of the U.S. economy.

That left market participants to pull back on their expectations for a 50-basis-point rate cut at the Fed’s meeting later this month. Those odds dropped to almost nothing on Wednesday from 3.8% the previous day while odds of a smaller cut were at 99.6% late Wednesday, according to CME Group futures. 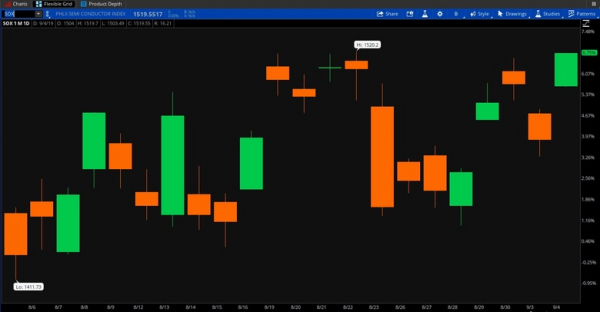 THESE CHIPS AREN’T DOWN: The semiconductor sector posted a strong showing Wednesday amid two bullish analyst reports and as news out of Hong Kong and mainland China was positive. Here, you can see that the PHLX SemiconductorSector Index gained nearly 2.8%, outpacing the gains of the broader S&P 500 Index (SPX).Data Source: Nasdaq Chart source: The thinkorswim® platform from TD Ameritrade. For illustrative purposes only. Past performance does not guarantee future results.

EPS Weakness Seen: As if investors didn’t have enough to worry about. In addition to the protracted trade war, uncertainty about the Fed’s interest rate trajectory, and worries surrounding the upcoming Brexit deadline, the market is also seeing increased pessimism about Q3 earnings growth for S&P 500 Index (SPX) companies. That’s particularly worrisome because, over time, earnings are what ultimately drive the market. As of June 30, Q3 S&P 500 earnings per share growth expectations were forecasting a 0.2% year-over-year drop, but that has expanded to a projected 3.3% decline, according to investment research firm CFRA, citing S&P Capital IQ consensus estimates. But the research firm says that “Q4’s growth estimate of 3.8% should more than offset Q3’s weakness.”

Yearly Trade Deficit Widens: The U.S. government’s monthly report on the trade balance tends to have a pretty low impact on the trading day, and yesterday’s report didn’t ripple the waters much. But the data on the United States’s imports and exports arguably has taken on more importance as the trade war with China has dragged on. The headline figure showed the overall monthly trade deficit fell 2.7% to $54 billion. But on an annual basis, the deficit is 8.2%, or $28.2 billion, higher than the same period a year ago. That yearly increase indicates “that the tariff actions have yet to have their intended effect of reducing the overall trade deficit,” Briefing.com said.

GDP Outlook:The trade report also affected the Atlanta Fed’s GDPNow forecast, which on Wednesday fell to 1.5% from the previous reading of 1.7%. The lowered figure comes as the nowcast of the contribution of net exports to Q3 real GDP growth fell, as did the forecast for Q3real personal consumption expenditures growth and third-quarter real nonresidential equipment investment growth. The forecast is another piece of data to add to worries about a slowdown in U.S. economic growth and perhaps a recession in the future.