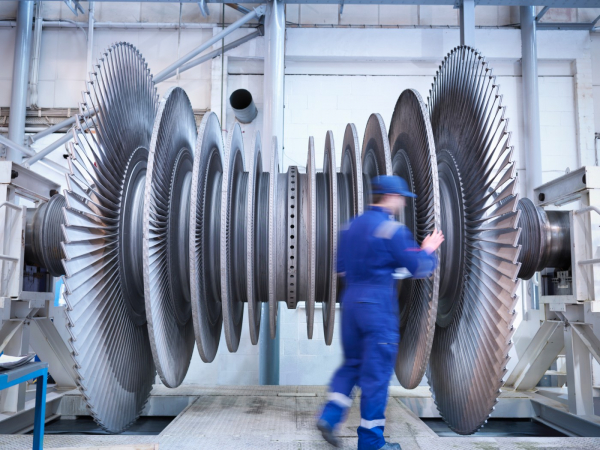 Mixed Bag: Jobs Data Are Weaker than Forecast After Other Numbers Cheer Market

(Friday Market Open) To cap a week where economic data has painted a mixed picture of the U.S. economy, a widely anticipated report on the jobs market came in weaker than expected.

Government nonfarm payroll data showed that the world’s largest economy added 130,000 jobs in August, well below aBriefing.com consensus that had expected the addition of 171,000 jobs. The prior reading of 164,000 jobs added in July was revised lower, to 159,000.

The disappointing figures come after U.S. manufacturing data earlier in the week signaled that the sector was in contraction but other numbers pointed to a stronger-than-expected private-sector jobs market, better-than-forecast factory orders and service sector strength.

A silver lining to the jobs report and manufacturing data could be a bolstered case for the Fed to cut interest rates, but the stronger data makes the opposite argument. After the government jobs data this morning, the futures market odds for a Fed rate cut didn’t change all that much. The futures market showed a 93.5% probability of a 25-basis-point cut later in the month, compared with a 91.2% probability prior to the jobs report. The rest of the probability was for the Fed to stand pat on rates.

Equity index futures pared their gains after the jobs data, but investors seemed to maintain some of their optimism from news that China moved to stimulate its economy by lowering the amount of cash banks have to keep on hand as reserves. The step by the Chinese central bank comes amid slowing economic growth in the world’s second largest economy as the trade war with the United States drags on.

Later today, Fed Chairman Jerome Powell is scheduled to speak, and investors are likely to be tuned in for any comments on monetary policy.

Sometimes, ahead of highly anticipated data, the market can enter a lull where traders and investors don’t want to take on particularly large positions ahead of the numbers. That wasn’t the case Thursday, as trade news and economic data sent the market sharply higher.

The market got a shot in the arm on news that the United States and China have agreed to high-level trade talks next month. The world’s two largest economies will also hold preparatory consultations during the middle of this month.

Also, July payrolls data from ADP and Moody’s Analytics showed that private companies added 195,000 jobs, well above the 165,000 expected in a Briefing.com consensus. The robust private-sector data helped boost the market ahead of today’s jobs number as the ADP figures are seen as a less comprehensive precursor to the government figures, even though they aren’t always in sync—as evidenced by today’s weaker than expected reading from the Department of Labor.

Other economic data on Thursday also cheered the market. A report on U.S. factory orders Thursday showed a 1.4% increase in July, ahead of a 1% Briefing.com consensus. And the Institute for Supply Management’s non-manufacturing index showed that the service sector in August registered a better-than-expected 56.4%, reflecting more expansion in the sector than had been forecast.

The optimism that helped boost stocks so much on Thursday was part of an increased investor appetite for riskier assets. That meant they felt less of a need for the relative safety of U.S. government debt, and as they sold Treasuries they pushed yields higher.

As investors and traders sold out of Treasuries, they also unloaded gold, another traditional safe haven along with Treasuries (see figure 1 below). The risk-on mood amid the trade talk news and strong economic data helped push gold futures 2% lower as it also caused Wall Street’s main fear gauge, the Cboe Volatility Index (VIX) to shed more than 6%. The VIX enters Friday morning below 16 for the first time in two weeks.

In sector news, Information Technology shares led the way higher, rising more than 2.1%. Some tech companies derive a substantial portion of their revenue from China and maintain supply chains in the Asian nation, so their stock prices often rise and fall with the trade-related news flow.The PHLX Semiconductor Sector Index (SOX) turned in an especially impressive performance, rising more than 3% even after jumping nearly 2.8% the day before.

With the outperformance of technology companies, the tech-heavy Nasdaq Composite (COMP) was the best performing of the main three U.S. indices, rising 1.75% while the Dow Jones Industrial Average ($DJI) gained more than 1.4% and the S&P 500 Index (SPX) added 1.3%.

The enthusiasm pushed the SPX toward the 3000 mark again, which makes us think that now might be a good time for a word of caution to counterbalance some of the giddy feelings days like Thursday can bring.

On the one hand, the scheduled trade talks mark an improvement from the deadlock we’ve seen recently. On the other hand, it’s just talk. The stock market benchmark may have a tough time breaking through resistance around that psychologically important 3000 mark without some concrete progress aside from negotiations, leaving that figure to be the top of a 2750-3000 range for the benchmark index. After all, prior to the announcement of October talks, the most recent concrete step the two sides had taken was to slap additional tariffs on each other’s goods.

Looking toward next week, investors are scheduled to see reports on producer and consumer inflation, retail sales and a consumer sentiment index. (See more below.) 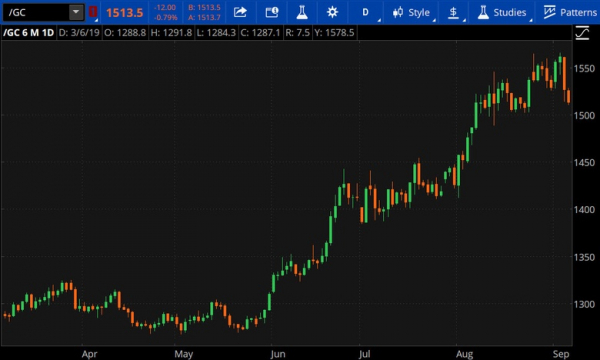 LESS SHINY.Gold futures prices (/GC) took it on the chin Thursday as strong U.S. economic data and encouraging news on the U.S.-China trade front dulled the allure of the metal as a safe haven investment. Still, it’s been quite a summer season for the yellow metal, which rallied from below $1,300 per ounce on Memorial Day to above $1,550 by Labor Day. Data source: CME Group. Chart source: The thinkorswim® platform from TD Ameritrade. For illustrative purposes only. Past performance does not guarantee future results.

Inflationary Pressure: Ahead of today’s employment report, the Fed earlier this week released some anecdotal insight into the state of the labor market in its Beige Book. The gist was that employment grew at a modest pace overall and that tightness in the labor market continued to constrain growth in business activity. Amid the tightness, wage growth remained modest to moderate while there was strong upward pressure on pay for entry-level, low-skill, technology, construction, and some professional services workers. Businesses were also using other efforts like enhanced benefits, work arrangement flexibility, and signing bonuses to attract and retain workers. Amid this inflationary pressure, it could be interesting to see what the producer and consumer inflation reports have to show us next week. The strong labor market also offers a counterpoint to the recent recessionary talk and the market’s desire for the Fed to continue lowering interest rates.

Hindsight… The U.S. consumer has been an island of strength in the seas of worry over global economic growth amid the trade war between the U.S. and China. U.S. July retail sales were better than expected. In the government’s most recent GDP report, consumer spending growth was revised to 4.7% from 4.3%. A recent index measuring small business optimism rose in part on solid consumer spending as consumer sentiment has improved in recent months. And despite some continuing problems in the brick-and-mortar retail sector, Walmart (WMT), Amazon (AMZN), and Target (TGT) all did well in their most recent quarters, reinforcing how resilient the U.S. consumer continues to be in spite of global economic turbulence. We’ll know more when retail sales figures for August are released next Thursday.

…Versus a Crystal Ball: But the retail sales data is backward looking. Consumer sentiment, however, can offer clues into the current status of consumer spending, with perhaps an eye toward the future. So it’s worth watching the preliminary reading on September consumer sentiment from the University of Michigan, set to be released next Friday. Amid negativity about tariffs the August headline number fell to 89.8 from the previous August reading of 92.1. Whether that negative sentiment will increase or abate, or stay the same, remains to be seen. Regardless, it could be interesting to see how consumers are feeling as the trade war has progressed.

Looking to stay on top of the markets? Check out theTD Ameritrade Network, live programming which brings you market news and helps you hone your trading knowledge. And for the day’s hottest happenings, delivered right to your inbox, you can now subscribe to the daily Market Minute newsletter here.