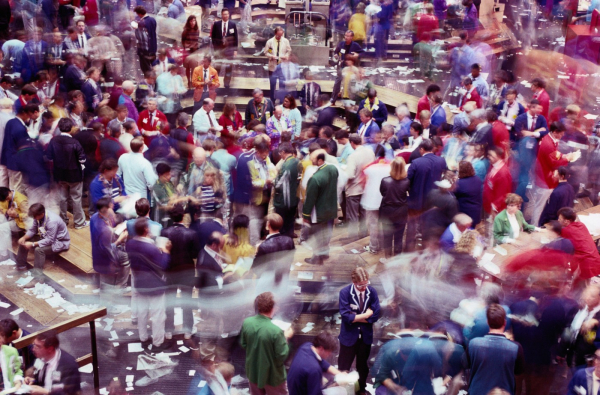 Stocks rise across the board in Europe, Asia

Stocks in Europe and Asia climbed across the board early Wednesday, assisted by signs of tensions cooling off in both Hong Kong and the U.K. Specifically, Hong Kong’s leader withdrew a controversial extradition bill, and the U.K. Parliament looks like it might vote to extend debate on Brexit, according to media reports. Positive momentum appears to be spreading from these two developments.

Crude also had a nice little pop as the overseas markets rallied, though it hasn’t made back all of its Tuesday losses. In another positive development, United Airlines (UAL) reaffirmed its guidance. People had been wondering if the airline’s business might be affected by events like the Hong Kong unrest and the trade war.

Hope also appears to be growing for more economic stimulus here at home in the form of Fed rate cuts. While the futures market still shows 90% odds of a 25-basis point cut later this month, chances for a more dramatic 50-point cut now stand at 10%. Chances of an additional rate cut in October now approach 70%, according to Fed funds futures.

Yesterday and today saw two Fed voters express conflicting views. St. Louis Fed President James Bullard said a 50-point easing would get ahead of market expectations as the trade war has become a broader “reckoning” to the global economy and creates a global shock.

On the other hand, Boston Fed President Eric Rosengren said no immediate rate action is necessary as long as the economy stays on track. Risks are elevated, he acknowledged, but have yet to become a reality. The U.S. remains resilient thanks to the strong labor market and modestly rising wages. He doesn’t believe the markets are signaling a recession.

U.S. Treasury yields climbed slightly early Wednesday, with the 10-year approaching 1.5% and the 30-year close to 2%. Maybe it’s significant that the 10-year yield isn’t inverted vs. the two-year yield, at least for the moment.

Tuesday was one of those days when investors were arguably better off looking at the S&P 500 Index (SPX) than the Dow Jones Industrial Average ($DJI) for a sense of market direction.

Sure, the $DJI was off more than 1% for most of the day and hogged the headlines, but the SPX—which is much broader and not so heavily influenced by just a handful of companies—fell less than 0.7% when all was said and done. That the SPX managed to close above the psychological level of 2900 might help provide some positive momentum heading into Wednesday.

The $DJI suffered extra pressure in part due to weak performance from components like Boeing (BA), Caterpillar (CAT), and Apple (AAPL). BA fell on a report of more possible delays for the 737-MAX. When you look at the SPX, a few sectors actually ended in the green, though admittedly they were in the defensive camp: Staples, Utilities, Real Estate. The worst performers Tuesday were ones that bulls tend to gravitate toward in strong economic times, including Industrials, Financials, and Technology.

Tariffs are certainly having a big impact on stocks, but it’s more than a tariff story this week. The issues in the U.K., including Brexit and political fireworks, weighed on the pound to start Tuesday. Even though the pound did rally a bit, the problems there are still a giant question mark for a major trading partner.

Then there’s the hurricane hanging around the Florida coast and threatening to move inland. Already, flights are being canceled and people are putting off travel plans. Airline companies could suffer the fall-out.

Depending on how long the situation lasts, this could start to have an impact on the economy—whether the hurricane lingers off-shore or moves toward the coast. In the aftermath of past hurricanes, companies like home builders and home-building suppliers sometimes got a boost from hurricane damage. While no one wants to see damage occur, it’s something to consider remembering.

To have this mix—along with tariffs, the situation in Hong Kong, and soft manufacturing reports from both the U.K. and the U.S. (see more below)—all right after Labor Day when everyone is coming back to work, is a tough start. Any one of these issues individually would be huge, but together it makes things even tougher.

With all of those separate issues churning, volatility hasn’t shown too much sign of calming down. The Cboe Volatility Index (VIX) dipped to just under 20 after starting Tuesday above that, but the move up from summer lows of below 14 shows that there’s still apparently a high level of uncertainty. VIX fell back toward 18 early Wednesday as global tensions appeared to ease a bit.

The SPX remains range-bound between roughly 2750 and 3000, and it’s hard to see it moving out of that range unless there’s some sort of resolution on trade. Few, if any, analysts expect that anytime soon. There is a theory that the longer the market stays in a range, the sharper the break-out one way or the other when it exits the range, but we’ll have to wait and see. Past, as investors likely know, isn’t necessarily precedent.

Before challenging 3000, the SPX would need to first break through technical resistance at 2940, an area it’s been unable to crack over the last few weeks despite numerous tries.

We’re between earnings seasons so it’s a little harder at this point to figure out exactly what corporate executives think of all this tariff escalation, but the takeaway from watching financial media recently is that many companies expect to start passing on costs of tariffs to consumers.

It’s unclear how big an impact that could have on product prices, but consumers are already apparently worried. Friday’s University of Michigan August sentiment data didn’t look good at all. The headline number fell to 89.8, from the previous August reading of 92.1 and down from 98.4 in July. The difference between those two months was the biggest point drop since December 2012, Briefing.com said. “The recent decline is due to negative references to tariffs, which were spontaneously mentioned by one in three consumers,” said the survey’s chief economist, Richard Curtin, in a press release.

If there’s one thing that’s arguably been propping up the U.S. economy over the summer, it’s consumer demand. This report is alarming because it calls future demand into question. On the other hand, last week’s August consumer confidence report from the Conference Bureau looked very strong and was up from July. Which one should you believe? Only time will tell.

Today marks the release of the Fed’s Beige Book, which could give insight into how regional U.S. economies are performing and how business leaders in those regions view current growth levels. 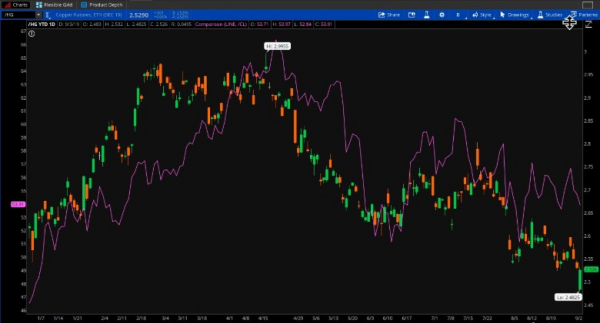 FIGURE 1: COPPER, CRUDE CATCH COLD: It’s been a tough few weeks for two of the most widely-used commodities, copper (candlestick) and crude (purple line). Copper fell to its lowest level of the year Tuesday amid tariff-related demand fears, while U.S. crude continues to chop around near $55 a barrel. Data Source: CME Group. Chart source: the thinkorswim® platform from TD Ameritrade. For illustrative purposes only. Past performance does not guarantee future results.

A Different Kind of Recession Hits: A lot of people seem worried about a recession sneaking up on us. Well, it’s here. Not an economic recession, which requires consecutive quarters where gross domestic product (GDP) falls year-over-year, but an earnings recession. For the first time in more than three years, S&P 500 earnings fell in consecutive quarters (Q1 and Q2), with Q2 earnings falling 0.4%, according to market research firm FactSet. The 0.4% decline (with 99% of firms having reported) was actually better than FactSet’s estimate for a worse than 2% drop before earnings season began, because positive earnings per share surprises in several sectors put the final tally in slightly better shape. Meanwhile, average S&P 500 revenue rose 4%, FactSet said, the lowest in nearly three years. Things don’t necessarily get better right away, with the firm expecting a 3.5% decline in earnings for Q3, followed by slight gains in Q4.

Negative Guidance Mounts: Speaking of Q3 earnings, 109 companies have issued guidance for the quarter. Of those, 79, or 72%, issued negative guidance, FactSet said. That’s above the five-year average of 70%. It’s still early, with more than a month until earnings season gets underway, but the fact that earnings estimates are negative and the forward price-to-earnings ratio on the S&P 500 Index (SPX) remained above the five-year average at 16.6 going into this week could be another reason stocks face pressure, aside from geopolitical turbulence. Last quarter, the two worst-performing sectors from an earnings standpoint were Materials and Industrials, two of the sectors most exposed to that geopolitical tension and also exposed to the troubles at BA. Health Care and Financials led sector earnings growth.

Could Weak Manufacturing Month Affect Payrolls? Conditions are getting worse on the manufacturing front. That was the takeaway from Monday’s August ISM Manufacturing Index. The headline number fell to 49.1 from just above 50 a month earlier. This followed a report early this week showing U.K. manufacturing output dropping to a seven-year low amid global trade tensions and political jockeying as the Brexit situation intensifies. While the U.S. ISM number is just one data point, it could raise eyebrows if more soft manufacturing data follow. This week’s jobs report, due Friday, could be interesting to watch from a perspective of whether the month’s manufacturing slowdown had any impact on hiring in that sector.