Apple (AAPL) surprised many investors early this year by chopping its fiscal Q1 revenue guidance, a move CEO Tim Cook admitted was “disappointing.” That quarter’s results bore out Cook’s reduced expectations, with revenue falling 5% year-over-year as AAPL navigated a long list of challenges.
Back then, AAPL’s once high-flying shares crumbled below $160 as investors wondered how the company would address slipping iPhone sales, a strong dollar, supply constraints, and economic weakness in China.
Judging from how the stock has performed since early January, investors appear to think AAPL has pushed its way through at least some of these issues. Its fiscal Q2 earnings and conference call this afternoon might shed more light on exactly how much progress it’s made.
AAPL shares recently traded at around $204, up 44% from the stock’s 52-week low posted in January. However, they’re still down more than 12% from their all-time high of approximately $233 reached last fall. There’s still worry about how a company that depended on the iPhone for its incredible run over the last decade can add to the growth story with iPhone sales heading the other way.
Like its “FAANG” brethren, AAPL hasn’t been as much of a market leader so far in 2019 as in 2018, and that’s not necessarily a bad thing for the broader market. Last year, the FAANGs often seemed to determine overall direction on Wall Street. This year’s rally has been more broad-based and arguably healthier, while the FAANGs have yet to fully recover from their Q4 losses. That said, AAPL shares are outperforming the S&P 500 Index (SPX) year-to-date.
Going into Tuesday’s fiscal Q2 earnings report, AAPL investors are likely to focus as always on iPhone sales, which fell 15% year-over year in the company’s Q1 while revenue from all other products rose 19%. Some analysts expect iPhone revenue growth to keep falling, at least until a 5G device is launched—possibly in 2020. Research firm CFRA predicts a 16% drop in iPhone sales in the company’s fiscal 2019.

AAPL’s other products include services, an area the company is more and more focused on as iPhone growth gets harder to boost. AAPL recently announced subscription services for video streaming (Apple TV+), news (Apple News+), and gaming (Apple Arcade), but, as Barron’s pointed out, didn’t share many relevant details. Tuesday’s earnings report and call might be a chance for investors to get more insight into those efforts, including possible pricing and launch date details. Still, there’s no way to be sure such logistical things will be discussed.
Back in fiscal Q1, AAPL touted an installed base of 1.4 billion devices, which arguably gives it a very broad customer platform for its services business. Services revenue grew 19% to $10.9 billion in fiscal Q1, so we’ll find out Tuesday what the follow-up was to that strong performance. Services is a higher-margin business than hardware, which could potentially support AAPL from a profit standpoint as services becomes a bigger chunk of the company.
AAPL has guided for fiscal Q2 revenue of between $55 billion and $59 billion, down from $61.1 billion in last year’s Q2.

International sales constituted 62% of the company’s revenue in Q1, so more than most companies, AAPL’s fortunes can be tugged back and forth by trade disputes like the ones between the U.S. and China and the U.S. and Europe. It also can get challenged by dollar strength, which tends to make U.S. products more expensive for overseas customers. In Q1 of 2019, the U.S. Dollar Index stayed mostly above 96, a relatively high level and well above approximately 90 a year earlier.
It might be interesting to listen on Tuesday for any color Cook and other AAPL executives offer into the China situation, as that country’s economy seems to have improved a little thanks partly to recent fiscal stimulus from Beijing. Back in a January letter to investors, Cook mentioned “a climate of mounting uncertainty” regarding the Chinese economy and U.S./China trade negotiations. Nearly four months later, those negotiations continue.
Investors might also want to consider listening for any more insight into AAPL’s legal settlement announced with supplier Qualcomm (QCOM) earlier this month. The two had been in a dispute over royalties and patents.
Earlier this month, AAPL received an analyst downgrade and an upgrade from a different analyst in the same 24 hours. Some AAPL observers take a bullish point of view, noting that AAPL gained market share in China for three months in a row. The bearish school of thought argues that those market share gains might have come at a cost, with AAPL lowering prices and maybe suffering a margin squeeze.
There’s potentially a compelling argument both ways. It’s definitely compelling to hear they’re picking up market share after all the China struggles they talked about back in early January. 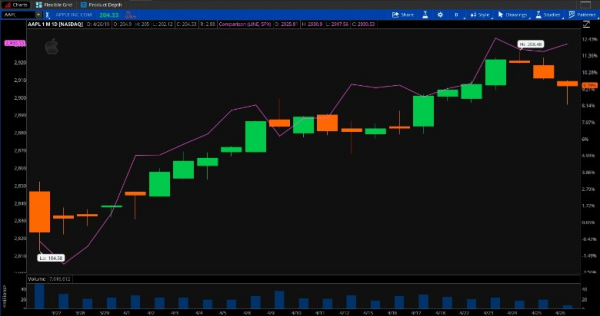 When AAPL releases results, it is expected to report adjusted EPS of $2.36, down from $2.73 in the prior-year quarter, on revenue of $57.44 billion, according to third-party consensus analyst estimates. That revenue would represent a 6.1% drop from a year ago.

Options traders have priced in a 4% stock move in either direction around the upcoming earnings release, according to the Market Maker Move indicator on the thinkorswim® platform. Implied volatility was at the 42nd percentile as of this morning.